At a time when it seems there’s a hot new messaging app every other month, going back to basics may be more effective. While efforts to engage customers often focus on big social media platforms, a new report by the London School of Economics highlights the often underestimated power of a newsletter.

Email, and not social media, is the number one application people use on their smart phones, says the LSE report released in 2018. Indeed, email technology is not affected by the move of users from desktop to mobile phones.

Although email does seem to have a higher amount of older readers, it is not limited to that demographic. The Skimm, a digital media company targeting millennials, has reached 6.5 million subscribers since it began in 2014.

A few things to take away from the report:

The subject line is one of the most important things to get right in an email campaign or newsletter. When it comes to email open rates, the most important measuring tool, the general consensus is that anything above 20 percent is good. Reducing the frequency of emails may help increase your audience.

Timing is also vital, reaching the early morning commute is a popular strategy, but has also become quite crowded. Many publishers are experimenting with sending times.

David Beard, who started the Washington Post’s email newsletter “The Optimist”, has chosen to send it around 10am on Sunday because he believes it’s a moment when people reflect more. 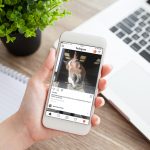 How to get the most out of InstagramThe Digital Trainer